But I am not an actor!

You do not have to have a Hollywood background to do video. You don’t even have to have a fancy camera. All you need is a Google account and a web-cam and you’re ready.

And if the wow factor is too high, it may not have the same powerful marketing effect that you would expect, because it looks like Hollywood produced it.  People are going to think, “Wow, they probably spent thousands and thousands of dollars creating this little, mini movie and commercial and so uh, they’re out to get me.”

It’s kind of a reverse psychology.

But if it’s an amateur in front of their camera, creating this short little video and putting it on YouTube, it’s like, “hey, this is a real person. He or she can relate with me. If they can do it, I can do it.” Your marketing message actually has a lot more power when it has a slight amateur touch to it.

One of the things that is so powerful about video is the viral factor. As you know, YouTube videos  have the potential to go viral. I don’t know if you’ve ever seen the video, “Charlie bit my finger.” But it’s one of the most popular, viral videos out there. These people captured it on their camera. Then they put it on YouTube and boom, it went all over the world. It’s just this little boy biting his older brother’s finger between his teeth, and his older brother is saying “Ouch, Charlie! You bit my finger and that really hurt.”

It is quite entertaining. 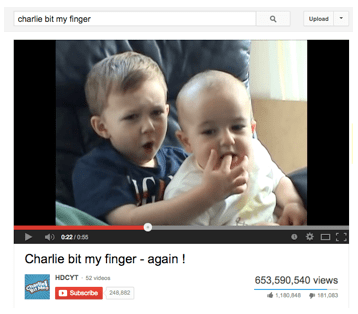 Even if your videos are not entertaining, however, they still have the potential of going viral. That’s just the nature of video and It’s not always controllable.

Sometimes, videos go viral for no reason, and people just start sharing them. They like them and share them and then more and more people get exposed to the video, and they like it and share it and on it goes.

A picture is worth a thousand words. A video with pictures, words, and sound is multiple times more powerful. And so if you can find a way to incorporate that power of video into your business, and into your marketing message, you will be able to take advantage of that power and use it in a way that helps your business grow. Chris Anderson on the TED Show said,

“Online video is driving astonishing innovation in thousands of different fields ranging from ultra-niche to the sharing of truly world-changing ideas.”

However, on the opposite extreme, you can be very innovative and share big, broad, world-changing ideas through the power of video as well.

Would you like advice on Video Marketing? We would love to help you get started with your video marketing campaign. Contact Us!

Written by Martin Holsinger on May 5, 2015 · Leave a Comment

This site uses Akismet to reduce spam. Learn how your comment data is processed.

E-mail marketing is said to be one of the most effective way to market your business. However, there[...]

I am going to give you a very easy to do strategy that will transform your website into a content ma[...]

As you may know, Social Media Marketing is a great way to market your business. But you may ask, wha[...]

This is Six Steps to Running an Effective PPC Campaign - Part Two. To read the first three steps in [...]

Six Steps to Running an Effective PPC Campaign - Part One